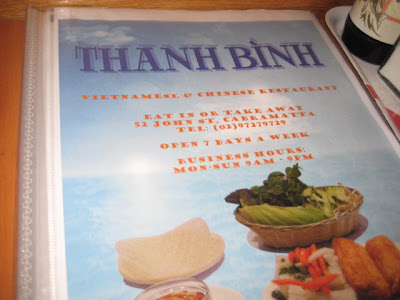 It was a last minute decision coming to Cabramatta for dinner. Went back from the city earlier than expected and my folks were out having dinner in Canley Heights. Unfortunately many places in Cabramatta close alot early at 6pm or 7pm like Tan Viet, Pho 54 and Pho Tau Bay. Luckily there were a few still open such as Thanh Binh Vietnamese and Chinese Restaurant. It was also a rainy day so I was in the mood for good old pho or Vietnamese beef noodle soup. 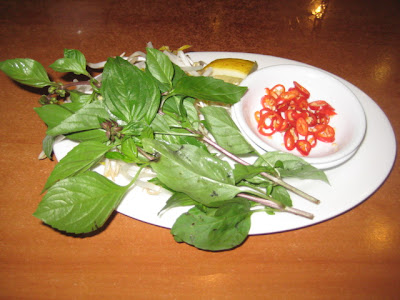 Plate of Vietnamese mint, bean sprouts, chilli and lemon wedges
Like many other Pho restaurants, a plate of lemon wedges, bean sprouts, chopped pieces of chilli and Vietnamese herbs including mint are served first. You can add whatever you want to the dish depending on what taste you prefer. For me, a bit of lemon and alot of mint helps to strengthen the flavour of the broth. 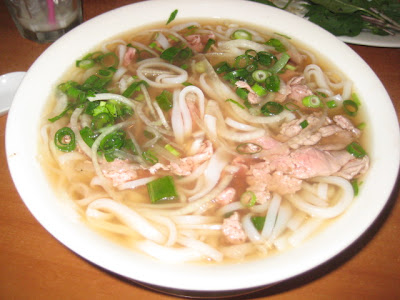 Pho Tai - Vietnamese noodle soup topped with rare beef
Most times the dishes are delivered very quickly. This time it seemed a bit busier and there were several large groups being served. Eventually my bowl of pho arrived at the table. Now for me, when I really enjoy a bowl of pho, I polish off the whole bowl including the broth! From numerous previous visits to this restaurants, this has always been the case. However, this time it sadly wasn't. The broth was not as warm as I expected so it took a while for the beef to be more cooked. 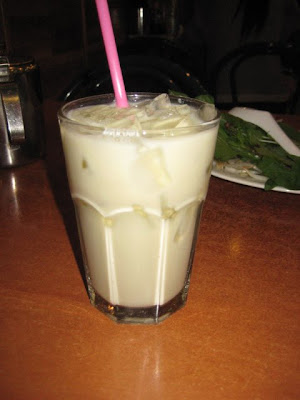 Soya bean milk
Thanh Binh has countless food options to try on the menu other than the noodle soup. Generally I found that the menu here is slightly less expensive than their sister restaurant in Newtown. In my earlier visits here, I have always thought their pho dish to be the best out of many restaurants I've been to. Lately it has been a hit and miss such as this occasion but when it's good, it's really good. Hopefully in future visits, the magic is still there. I would also recommend trying the other dishes such as their famous chao tom. Also the service here is generally pretty lovely with a complimentary mintie at the end of your meal when you request your bill.