Arisun is one of those restaurants where you should have been there by now. At least according to pretty much everyone on my Facebook. I probably have at some point during uni but nowadays it has been a blur. After hearing raves from everyone about Arisun's fried chicken, I gotta check it out soon. One Friday night, we were supposed to have dinner at Chefs Gallery but it was already too full for 5 hungry diners so we headed to Arisun since it was closer to where we were planning to go for karaoke afterwards. 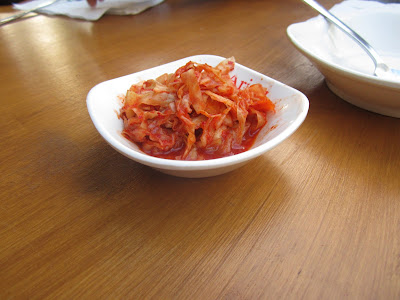 This restaurant has your usual Korean favourites including your complimentary kim chi and other starters, hot pot, seafood pancake, Korean BBQ and various noodle and rice dishes. We started with the usual complimentary Korean starters including the good ol' fashioned kim chi which wasn't overbearingly spicy that it usually is so I was able to try more pieces than the usual. The guys asked for rice to accompany with some of our dishes and the waiter delivered a huge bowl of rice for everyone to share. 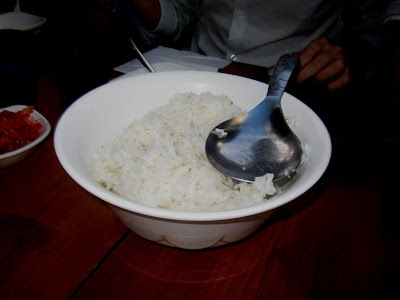 The guys were craving for some Korean BBQ beef so we decided to try this as well. It was delivered to us on a hot plate in a similar way to the hot plates I've seen at Chinese take away shops around Haymarket. The waiter poured the beef, onion and other sorts of veggies onto the hot plate where it sizzled intensely. Bits of the hot oil were flying everywhere while we watch the food getting cooked. The beef was lighter, less stodgy and more succulent than the beef I usually get from those Chinese take away shops. I was almost eager to have more than I needed but we have more dishes coming up. 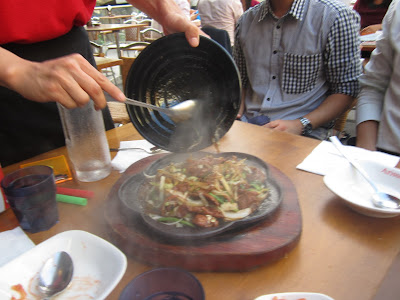 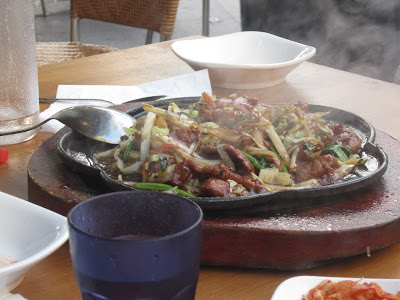 One of my favourites that I notice at Korean restaurants was the black bean noodles - also known as Jajangmyeon. It wasn't the prettiest looking dish and it does require some effort with stirring the noodles and the thick, rich sauce together. Despite that, it was still delicious since it was something I have not tried as often. And I enjoyed slurping up these slippery, savoury and slightly sweet noodles. While this meal costs $11, the serving is generous that you can have the whole bowl for yourself at a small price. 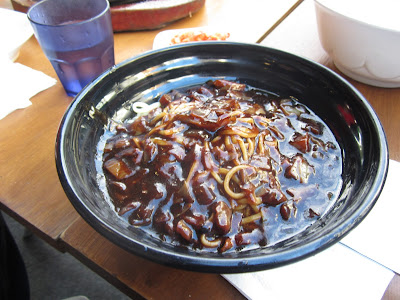 The guys ordered their share of the black bean noodles but with seafood instead of meat. Also the noodles were already stirred thoroughly before the seafood and veggies were added. Enjoyed this version as it adds variety to the meal rather than just noodles and black bean sauce plus it wasn't as thick and rich as the former. Again, the price is very affordable considering the size of the plate. 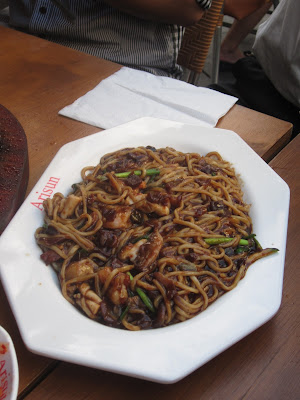 One of the guys was planning to have this dish all for himself but when we saw it, everyone was so eager to have a piece to the point where I could not get a shot of the full seafood pancake. It was much thinner and a bit less crispy (but not soggy!) than most other seafood pancakes that I've tried but I'm glad it was a lot lighter as we were already starting to get full. The batter did not overpower the pancake so I found this pancake to have a balanced amount of flavours from different ingredients. We finished this off so quickly before we knew it and the guys were still keen for seconds but we still have to wait for the fried chicken. 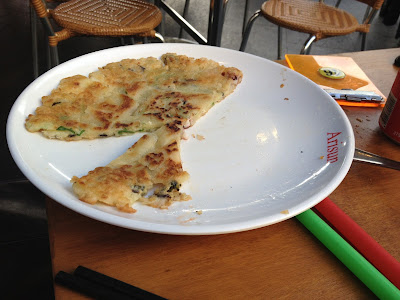 
And finally it shows up! Here at Arisun, you have the choice of the Original Fried Chicken, Soy, and Sweet and Spicy. Regardless of your choice, the price is $30 where you get an epic load of chicken pieces that I would recommend to share with 4 or more especially if you order heaps of dishes like us. Otherwise, if there is one thing you have to order at Arisun, it has to be this and even then, I would still recommend to bring at least 2 hungry friends to finish off the chicken.

Was it worth the hype? My verdict: it was some damn goooood chicken! Crunchiness was everywhere on these juicy and lightly seasoned chicken pieces. It was delivered in small golden brown chunks but it was enough for us to fill up without getting too bloated. What makes this even better was that it wasn't oily at all despite being fried and incredibly crispy and most of them were boneless pieces so we didn't have to worry about picking too many out. It wasn't the best fried chicken I've ever had (sorry but my heart still goes for Hartsyard's fried chicken) but it's up there for best Korean fried chicken with its succulent batter which got us addicted and compelled to finish every single one of them. 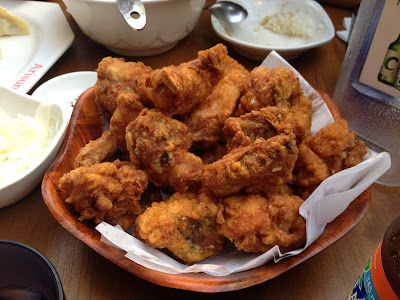 As it has an outdoor seating area, the atmosphere was very social and enjoyable (we were probably the loudest group that night!) and the staff were generally attentive. Plus the prices were reasonable since we shared all of the dishes. If you are keen for purely Korean cuisine, I'd give this place a go as they do a tremendous job with it. Will come back soon particularly during the colder months as I've heard that Arisun does a mean hot pot. I can understand the appeal for Arisun and their crispy Korean fried chicken and wouldn't mind trying out the other flavours of chicken soon as well as having a shot of soju or two if we're planning to have a crazy night out. 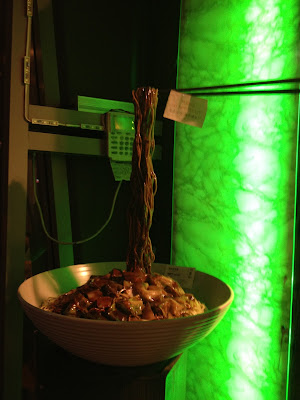 Thought this was real...